Conquering the Five Dysfunctions of a Team 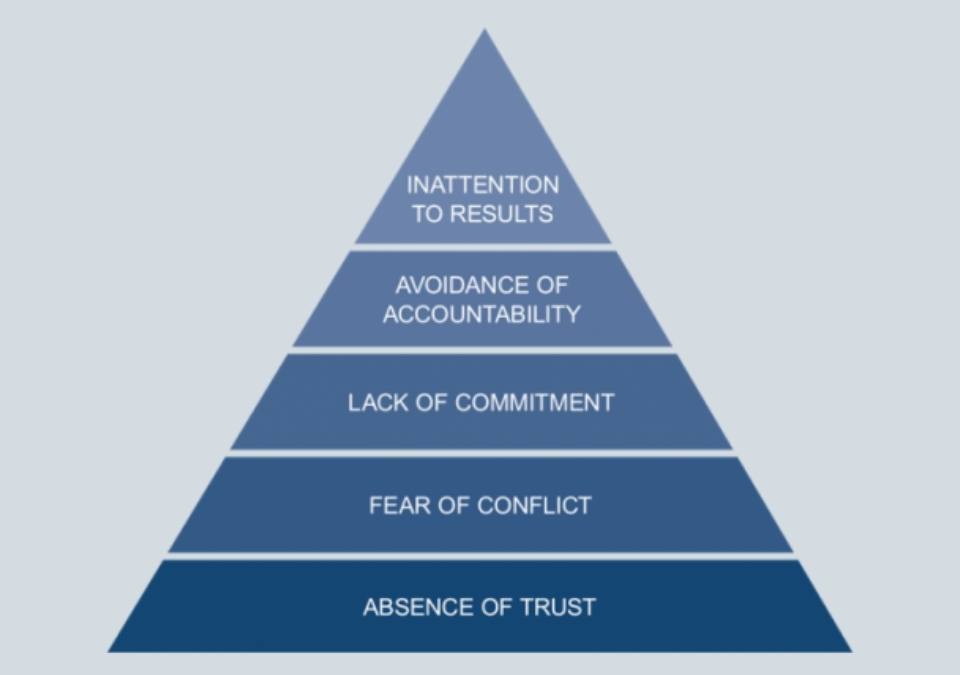 The Five Dysfunctions of a Team model (above) was developed by Patrick Lencioni, author of the best-selling book of the same name and founder and president of The Table Group, a US-based management consulting firm.

The model, drawn from Lencioni’s experiences in executive team development, identifies those attributes that tend to be apparent in less cohesive and effective teams – that is, the five dysfunctions of a team.

​“Not finance. Not strategy. Not technology. It is teamwork that remains the ultimate competitive advantage, both because it is so powerful and so rare.”

​by Patrick Lencioni, author of The Five Dysfunctions of a Team

Let’s take a brief look at the model:

The first dysfunction is the Absence of Trust. The simple fact is that if team members don’t trust one other, they become fearful and hesitant to communicate honestly and openly with one another. They hide their true thoughts and feelings, and can become unwilling to take responsibility for fear of making mistakes – all of which impedes the effectiveness of the team. Crucially, Lencioni refers to the concept of “vulnerability-based trust”. The best teams are those in which members are open with one another – ready to disclose their thoughts and feelings, share ideas, admit their own shortfalls and mistakes, ask for help, give and receive honest feedback. Team members are open with one another because they are confident that each member has the best interests of the team/business at heart. In Lencioni’s words “Trust is confidence that teammates will not slip a knife in your back as soon as you turn it“.

Having trust in one another is an absolute foundation stone of highly-effective teams, and helps them counter the second dysfunction of a team – Fear of Conflict. If team members don’t trust one another, they’ll also be reluctant to confront one another. Discussion relating to key issues may be absent, muted or indirect, or not really get to the heart of the issue (ie. it may be a case that they achieve “artificial harmony” but not genuine commitment). In other cases, team members that don’t trust one another may well confront the issue, though do so in a competitive, unconstructive, aggressive manner with the purpose of “beating” the other person and promoting individual rather than team interests. Lencioni rightly emphasises that confrontations and conflicts, when they come with the right intention and are effectively managed, are “necessary goods” as opposed to “necessary evils”. Good confrontations provide the opportunity for the promotion of new ideas and the elimination of not-so-good ideas, the improvement of systems and processes etc…. Healthy confrontations and conflicts are honest, open and goal-directed and as such serve to improve the performance of the team, business or organisation.

Only with the ability to master conflict will a team be able to effectively address the third dysfunction of a team – Lack of Commitment. Of course, teams work most effectively when every member clearly understands, endorses and commits to the goals of the team. Without commitment, efforts dissipate, the team’s work is not true “teamwork” and members may instead focus their attention on individual interests. A couple of the keys to achieving team commitment are buy-in and clarity. Buy-in occurs when all team members have had an opportunity to share their opinions and ideas (which will only occur if there is trust and a willingness to engage in healthy debate), and those opinions and ideas have received genuine and appropriate consideration. Clarity of course is about ensuring each team member absolutely understands the agreements/decisions of the group.

Without true commitment, it’s highly probable that the team will find itself troubled by the next dysfunction – Avoidance of Accountability. If the decisions of the team are ambiguous and/or there is an absence of genuine buy-in to those decisions, holding team members accountable for their part of the plan/decision/agreement will be difficult. The best teams hold one another accountable for adhering to the decisions and standards of the team. In addition, they don’t rely entirely on the team leader as the source of accountability – peers hold one another accountable.

Accountability is crucial to avoiding the final dysfunction of a team – Inattention to Results. This is where the “rubber hits the road”. Effective teams achieve results, and they achieve results because members of the team trust one another, they don’t fear confrontation or conflict, they facilitate commitment, they hold one another accountable and of course they focus predominantly on achieving team/business/organisation results rather than prioritising their individual achievements and agendas. Team members focus on results by developing and implementing clear mechanisms that encourage/impel them to do so; publicly committing to achieving clear objectives, making results public and linking recognition and rewards to achievement of results, for example.

So there you have it – an overview of the Five Dysfunctions of a Team model. In my experience, it “stacks up” – the most successful teams I’ve worked with in my consultancy assignments, and been a part of, have been largely free of the five dysfunctions, whereas the less effective teams tend to have been hamstrung by them.

How about the teams within your business?

If you’d like to explore this further please call or email for details of our workshops based on the Five Dysfunctions of a Team model.